Join us for a July 7th trip for a Rideau Woodland Ramble (32-seater Highway Coach to Merrickville).

Where/When to get tickets:

Please call Johanna McCarthy at 476-0240 or send an email to jcmleewis@kos.net

This is a gala year for the 25th annual Trenton Woodlot Conference, hosted by the Hastings Stewardship Council on Friday, Nov. 21 from 8:00 am – 4:30 pm at the Knights of Columbus Hall, 57 Stella Crescent in Trenton, Ontario.  Admission is $30.00 and includes a locally catered lunch plus bus transport to the field trip at Frink Outdoor Education Centre.  Don’t miss a full day of speakers – including Diana Beresford-Kroeger – exhibits, activities, and the opportunity to meet forestry professionals. 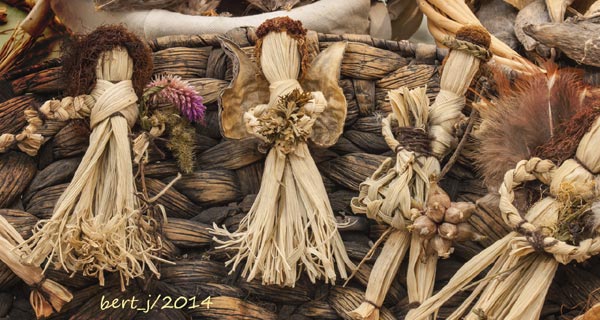 Almost 40 members were present, glue and scissors at the ready, for the presentation and hands-on learning opportunity. Laurie McMurray gave a brief introduction to the art of making dolls from corn husks. She illustrated her talk with a full table of materials (flowers, leaves, fur, corn silk, feathers, and other ‘found’ items) and lots of corn husks. There was also an explanation of why corn husk dolls have no faces!

Laurie explained how to begin the doll and produce one in a few simple steps. Then left the PECHS members to let rheir imaginations run riot with all of the decorative odds and ends on the table. All of the dolls made at the meeting will be used to decorate the PECHS tree at the Festival of Trees fund-raiser in late November.

Dolly Mixture – having a good time for charity

After the official collection of the dolls, the business of the meeting continued.

Colleen introduced the proposed changes to the constitution and by-laws which are to be voted on at the November AGM, and discussed the rationale for the changes.

Members were reminded that the AGM is preceded by a Pot Luck dinner beginning at 6:00 pm, and invited to sign up for providing food (to ensure that we don’t have 40 potato salads and nothing else :)).

Members were reminded about the Festival of Trees and asked if they could provide some small prizes to go under that tree for the charity auction in support of the Hospital Auxiliary.

This month, the mini-show had entries in two classes:

As customary, the entries were judged by the members present at the meeting. 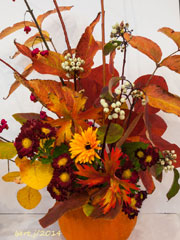 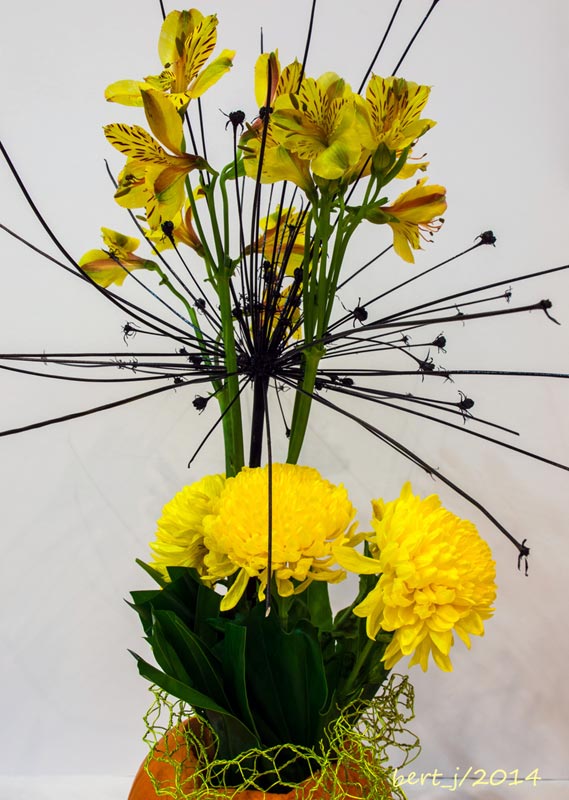 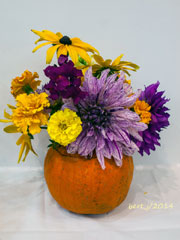 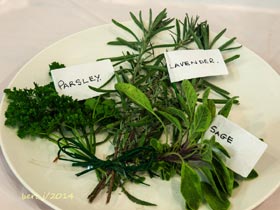 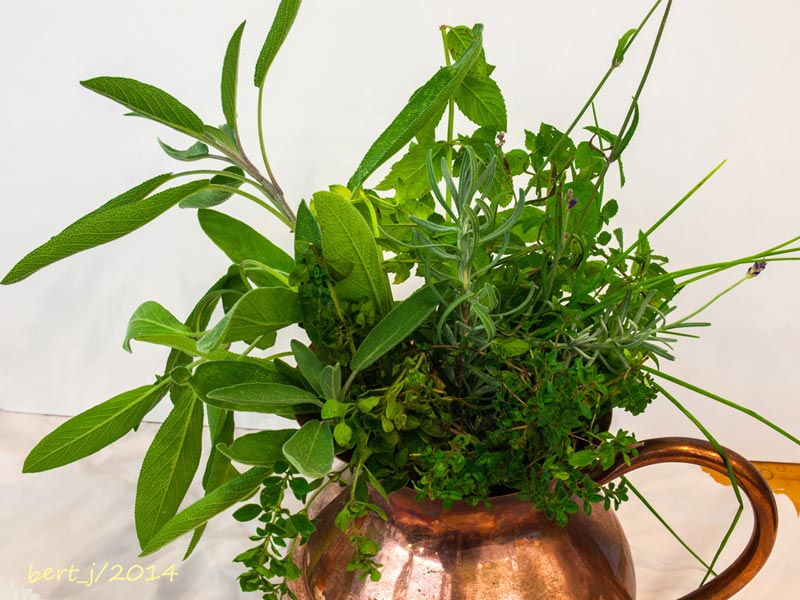 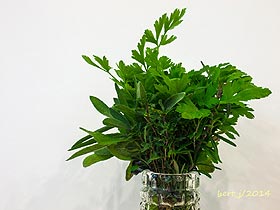 We recently received notification from the Ottawa Bonsai Society of their upcoming Beginners Course (registration deadline October 31). Full details of that course can be found on their web site at ottawabonsai.org. 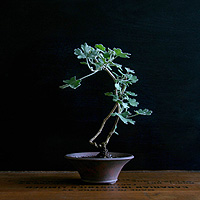 Elizabeth Cowan forwarded the notice about the bonsai workshop in Ottawa to Jonathan Kaiser, one of our new members. Jonathan replied and sent a neat picture of a bonsai chrysanthemum he’s growing (creating?).

Sunday June 29th, 2014 dawned bright and early as people prepared for The County Garden Show. After months of preparation, advertising and placement of signs throughout The County, it was an early morning for the PEC Horticultural Society Volunteer Staff (including many 4H members) and the Vendors.

By 6am there was a lot of activity in the Crystal Palace and the surrounding grounds. Staff had to prepare for the Vendors, Victorian Tea, Raffle, Blue Bird Room and the Flower Show’s 163 competitors.

Many indoor Vendors had set-up the previous Saturday evening with the balance and outdoor Vendors rushing to be ready for the 10am Show opening. Monique, our Sandwich Board walker was loaded up with handbills to distribute on her walk along Main Street. 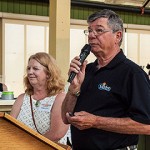 At 10am, there were line-ups at admission. Show Day was off and running! Mayor Peter Mertens welcomed everybody and declared the show open.

There was a greater variety of vendor offerings this year and visitors came from across Ontario and border states. Comments most often heard were ‘this show is a lot of fun’ and ‘very well organized’.

At the end of the day, over 600 Visitors had enjoyed The County Garden Show and profits exceeded 2013 … more dollars to go toward community projects.

Thanks to Vendors, Sponsors and a group of exceptional Team Players!

The Flower Show’s full results can be found right here as a pdf file [97 kb]. 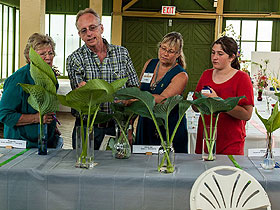 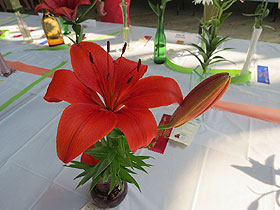 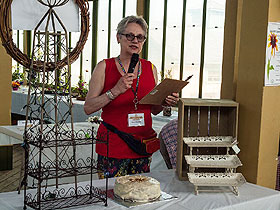 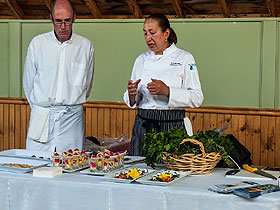 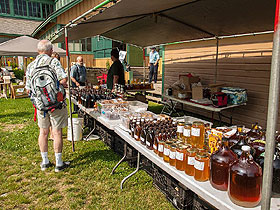 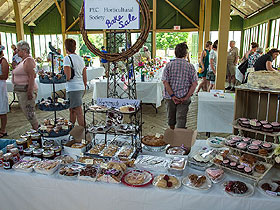 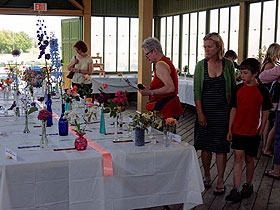 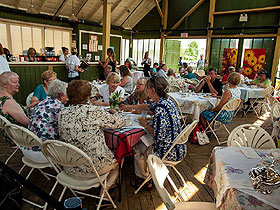 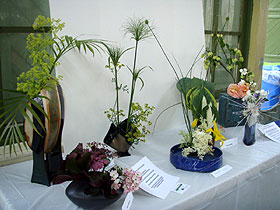 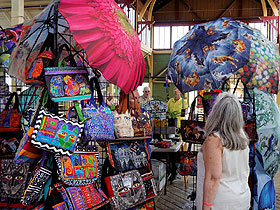 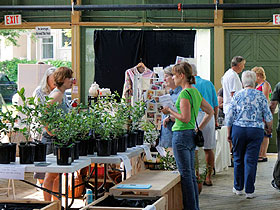 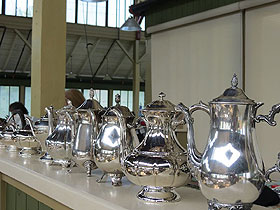