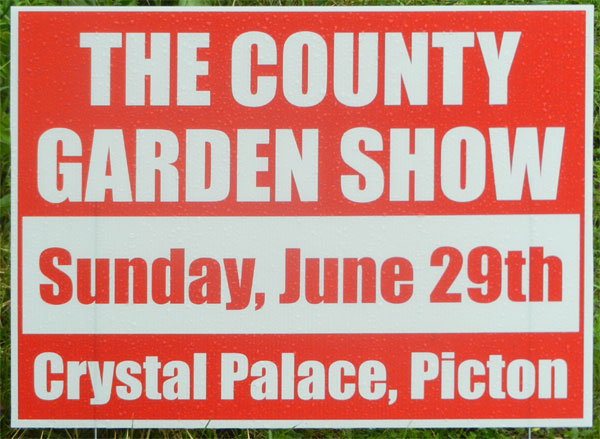 Come out on Wednesday April 16th to hear a presentation by Tyler Wheldon from Trent University and Brent Patterson from Ontario’s MNR. 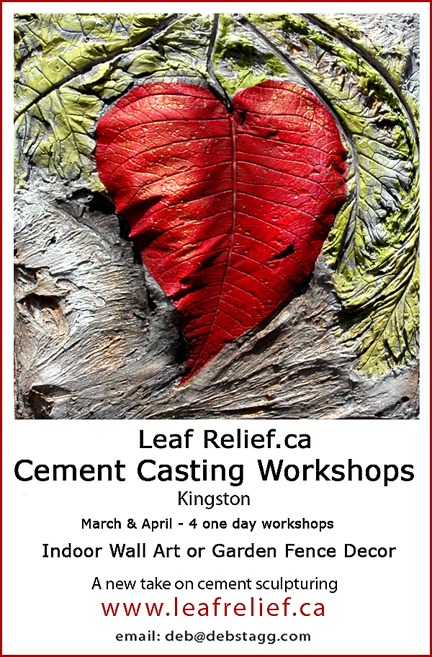 Deb Stagg is a Kingston artist specializing in cement garden décor and offers four one-day workshops in her Kingston studio in March and April.

For general information on what Leaf Relief is all about, visit the web site at www.leafrelief.ca.

For complete details on the workshops, visit this page of the Leaf Relief web site.

The January 29 meeting was cancelled because of a storm, and for a while it looked as if the February 26 meeting might be snowed out as well.  But the faithful struggled through, for our first meeting since before Christmas.  Society President Colleen Green welcomed everyone back and told us that preparations are well under way for the County Garden Show on June 29, with vendors already found by Anne Reeves for over half the space.  She reminded us that the March meeting is on the 26th, and the speaker will be Nicolette McGraw, who will talk about photographing gardens; at the April 30 meeting, the 4H will be sending members to hear Penny Stewart explain how to enter a flower show.  Elizabeth Cowan made a quick pitch for people to help with promoting the Society in general and the County Garden Show in particular, and membership secretary R. John Garside said he would be calling each member to check on their info in the file.

Colleen then introduced the featured speaker for the meeting, Peter Fuller, whose topic was “The Local Landscape:  Selecting, Growing and Propagating Native Plants”.  Peter, who used to be a full-time high school teacher and a part-time horticulturalist, is now a full-time horticulturalist and an occasional teacher, with a nursery (Fuller’s Native and Rare Plants) at 175 Airport Parkway in Belleville.  He practises ethical seed collection:  no trespassing, no digging up of wild plants, no robbing rare plants of seed, no taking of seeds unless there is a well-established population of the plant. 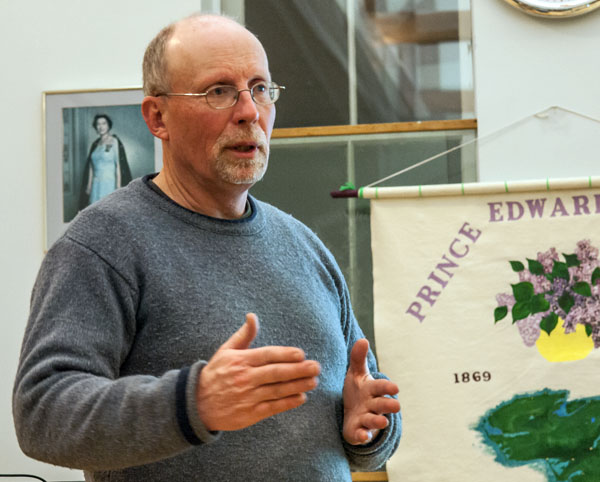 Peter began by explaining how difficult it can be to decide which plants are “native” and which are “foreign”.  If something was brought to the western hemisphere 400 years ago, is it still foreign?  If it flourishes in New York State, is that too far away to be considered a native of our area?  His nursery is called the “home of the 100-mile garden”, because he has opted to set that as his limit for accepting a species as local.

Peter illustrated the possibilities for County gardens with a series of dazzling slides, with plants divided up by where they prefer to grow:  in water, along the margins of wet land, in dry areas or in shade.  He had dozens of suggestions and answered many questions about particular situations.  Attracting bees, butterflies and other insects was a particular focus, and the pictures showed some of his plants covered in them.  The presentation also dealt with grasses, shrubs and plants for rock gardens.  When it ended, people jumped to get information on his nursery; if you weren’t there, you can take a look at www.fullerplants.com.

The raffle prizes were a bird house, a book donated by Peter Fuller and two passes to Canada Blooms, and orchids donated by Marvin were on sale. 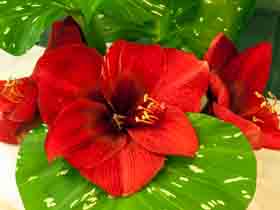 The mini-show was two separate categories.

As customary, the entries were judged by the members present at the meeting: Patricia Stuckey [image at right] came first in the “Design in the Shape of a Heart” category, with Mary Jenkins second [image below left], and Mary won first in the “Miniature All-Dried Arrangement” category [image below right]. 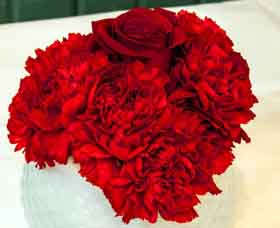 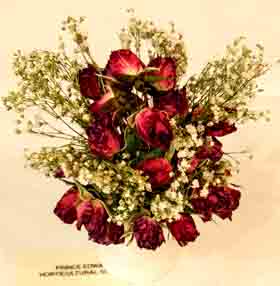 November’s meeting was an extravaganza in three parts – the annual dinner, the AGM business meeting, and the trophy awards for 2013.

After a spectacular buffet meal (all prepared by society members), Colleen Green called the meeting to order. After introducing our special guest, Penny Stewart (not dressed in spooktacular fashion this time), Colleen invited Norma Crichton to give a report of activities of the PEC Green Trust. Norma’s report can be found in full on the Green Trust web site here. If you have ideas for a PEC project that deserves Green Trust funding consideration, please contact Norma Crichton.

Colleen called for a motion to approve the minutes of 2012 AGM that were distributed before the meeting. On a motion duly proposed and seconded, and without discussion, the minutes were approved as submitted. Colleen then called on Howard Hunter as Treasurer to deal with the financial statement and appointment of auditors.

Howard gave a quick overview of the financial statement and answered several questions from the floor. Following a motion to accept the financial statement was called and passed by the membership. Howard proposed a further motion to retain the same auditors to provide oversight for the 2014 report. In response to a question from the floor, Howard confirmed that the audit was a legal requirement but that the auditors (in our case) provide the service at no charge. The members approved the auditors for 2014 to be the same as for 2013.

Colleen Green then called the existing directors present and invited audience members to join them to stand for office. A sufficiency of members volunteering for (re)election resulted, whereupon those elected were declared as listed and shown below. 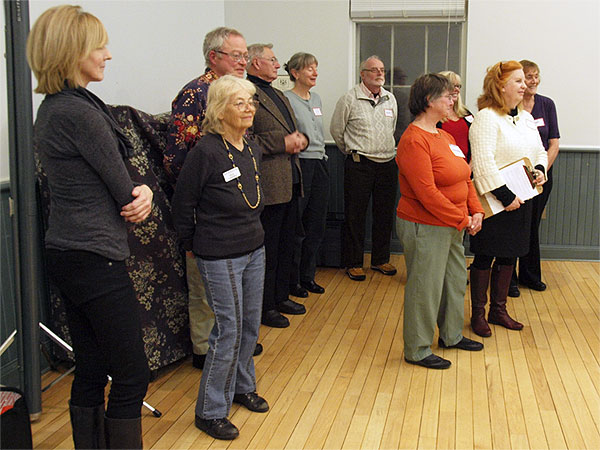 The envelope please!
The final piece of business for the meeting was the official presentation of trophies for winners at the Flower Show. 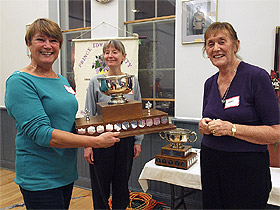 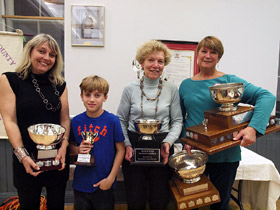 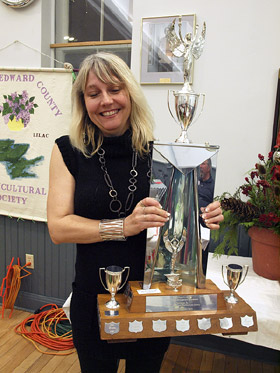 Above left, presenters Elizabeth Cowan and Mary Jenkins with Patricia Stuckey (and one of her trophies).

The Club is providing turkey and ham. Please bring side dishes, desserts, and remember to bring your own dishes, flatware and mug.

Social with refreshments at the conclusion of the AGM – come and join us.

The minutes of last year’s meeting and the financial report will both be proposed with a members’ vote for acceptance.