President Colleen Green welcomed 30+ members and new members to the meeting and noted that the next society meeting was the Annual General meeting to be held on November 27 immediately after the 6:00pm Pot Luck Supper. Colleen gave a brief outline of the recent District 3 event in Tweed and reported that, based on what was learned, our society is headed in the right direction. Congratulations to all concerned!

The Horticultural Society has been invited to create a tree for the Festival of Trees in late November.

Colleen then introduced the evening’s featured speaker – OHA District 3 Director Penny Stewart. During the informal session before the meeting started, Penny was resplendent in full Hallowe’en mode including the witch’s crooked hat. (Un)Fortunately, there are no photographs of her in full regalia.

Penny’s topic was ‘Flower Arranging’ and she reminded everyone that it’s supposed to be fun – hence the flowing black dress and witch’s hat (and the bats) – fitting into the presentation theme of spooktacular.

What followed was a highly animated display of constructing TWO show arrangements with hints and tricks of the trade being showered on the audience.

First came a ‘mass’ design involving a small pumpkin as the topical container as Penny explained style, balance, size, colours, and textures as they applied to winning displays. No sooner was that completed then Penny moved on to the large design (and a large pumpkin) with lines of hawthorn and corn stalks for balance and volume as well as the colours and textures that make flower arrangements so appealing. The pictures below show the overall effects of the designer’s art … and the bats were there because it’s all meant to be fun!

For those who missed it, or were busy watching the display construction, here are Penny Stewart’s Notes [32 kb pdf] on her presentation. 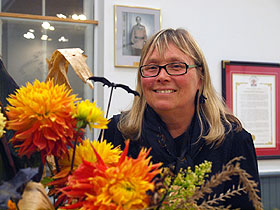 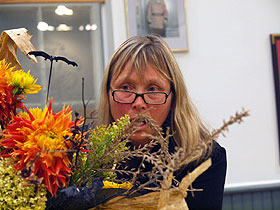 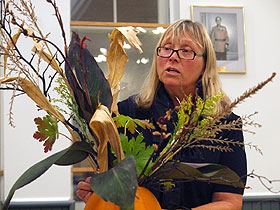 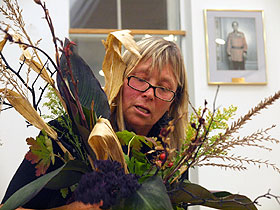 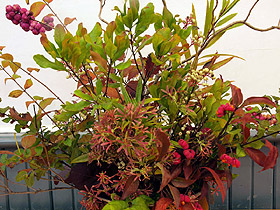 The mini-show topic was ‘anything pruned over the year from your garden or environs, dried and/or still green’.

Mini-show entries were judged by the members at large. 1st place went to Pat Stuckey [image at right], 2nd place to Sheila Simmons [image below left], and 3rd place to Mary Jenkins [image below right]. 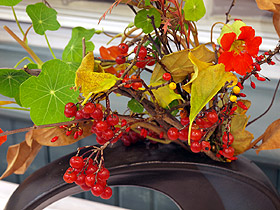 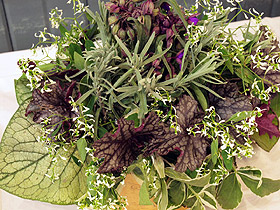 Apologies for the delay in publishing the results from the Flower Show on June 8 (with the County Garden Show) at the Crystal Palace.

The complete set of results [87 kb pdf] can be viewed/downloaded here.

With the Summer break over, it was back to ‘work’ for the Society members. President Colleen Green kicked off the meeting by welcoming over thirty members, and introducing Marvin Chapman who was the judge for the Rose Show. Colleen took the opportunity to tell members about the upcoming grand opening of Marvin’s new store location on Main Street. Marvin followed with a quick rundown of the ‘green’ initiatives and recycling of materials he had embodied in his new store and advised members of some specials. 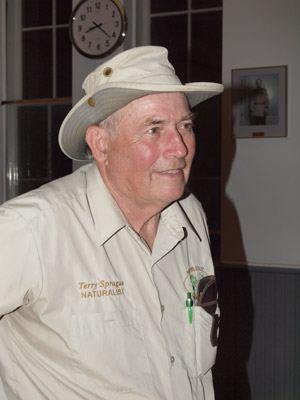 Colleen introduced the featured speaker for the meeting – Terry Sprague – and his topic ‘Nearby and Natural’.

Terry began by explaining his definition of ‘nearby’ as the Quinte Area – Belleville-Napanee – and points North towards Highway 7 (more or less). Terry’s definition of ‘natural’ includes conservation areas, nature reserves, provincial parks, national wildlife areas, hiking trails, wetlands, ANSIs (areas of natural science interest), and conservation reserves. All in all, there’s plenty of natural of all varieties and lots of ‘nearby’.

There are about fifty (!) conservation areas in the Quinte area ranging from a few acres to the much larger such as Depot Lakes. Terry’s slide show provided some images of trips in the Depot Lakes that illustrated the natural diversity and the meteorological diversity (which occasionally made the hikers very, very, wet).

Among the nearby/natural and remarkable, Terry included the Ameliasburgh Inlier (in PEC on Victoria Road south of Belleville) where a mazsive outcrop from the Canadian Shield – normally many hundreds of feet below ground in S. Ontario) can be seen. And sure enough, true to its Canadian shield origins, the area supports many varieties and northern plants rather than the more usual PEC varieties. Sandbanks was another wonder Terry mentioned, telling the story of the Antlion and the traps laid on the dunes for prey. Prince Edward Point has had more than 320 species of bird recorded at and near the banding station.

And even closer to home is the Millennium Trail from Carrying Place to Picton to close out the many opportunities to see rare and unusual plants, remarkable geologic features, and much more.

Terry’s closing advice was “look around you” and admire the natural and nearby we have here.

For more from Terry, visit his web site at Naturestuff.net

The September mini-show was the Society’s traditional Rose Show.  Entries were judged by Marvin (Flowers by Marvin) Chapman. 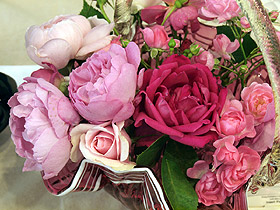 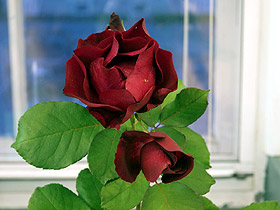 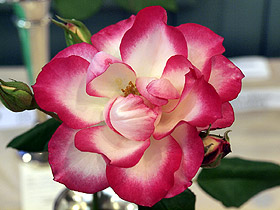 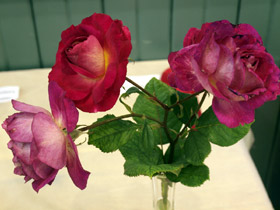 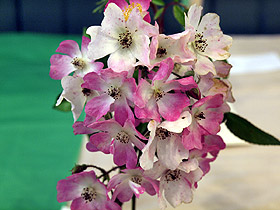 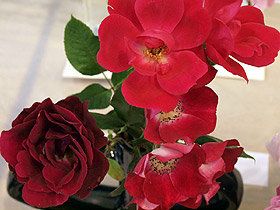 The County Garden Show on June 8 at the Crystal Palace in Picton, was a great success! The Show was three times larger than the previous year.  2013 saw over 30 Vendors and 7 Not For Profits. Despite Mother Nature not co-operating (showers on and off all day) over 500 visitors attended. Vendors were impressed with the management and organization of the event and a number have already requested space next year. One frequent comment from vendors and visitors alike was how much they had enjoyed themselves. 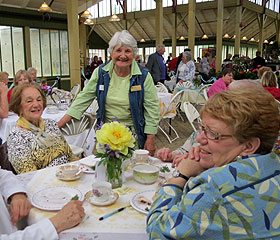 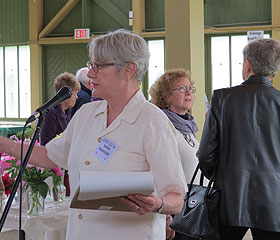 The Raffle offered over $1300.00 in prizes, with all profits going to various Community ventures. Special Thanks to the over 20 Sponsors who were generous with their offerings!

The Victoria Tea Room was very busy with all tables full most of the day. Visitors were very surprised by the value they received there and the easy companionship of fellow Tea Enthusiasts. 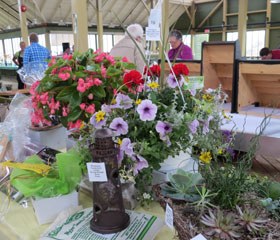 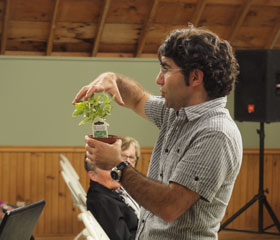 Paul Zammit’s presentation on Container Gardening was a resounding success. A highly animated and knowledgeable speaker at his best.

Mayor Peter Mertens presided over the official opening of the Flower Show. This Show was larger than ever with over 150 entries. 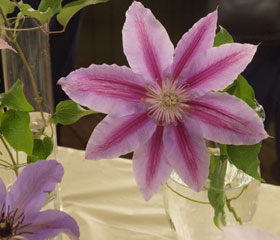 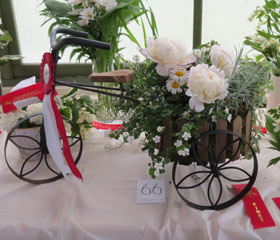 Our Volunteers received a Big Thank You with a special Volunteer Appreciation BBQ a few days after the Event. Frankly, without them, the show could not have gone on!

Many, many pictures of the Garden Show and the Flower Show are posted on our Facebook page.

Saturday June 8 at the Crystal Palace, from 7pm until 11pm, enjoy the Green Trust Music Festival.

The Save Ostrander Point Appeal of the PEC Field Naturalists is inviting clematis specialist Peter Keeping to speak at Bloomfield Town Hall on Saturday April 27 from 2:00 until 3:30 pm as part of their fund-raising effort.

Details at www.saveostranderpoint.org/ or call Sandra at 613 393 5577 for more information.