Longer days and better weather had a nice effect on the turnout for the March meeting. Over thirty members and guests were welcomed by President Colleen Green as she opened the meeting.

Following announcements about memberships, discounts available to members from area Garden Centres, the availability of tickets for Paul Zammit’s presentation at the County Garden Show and Green Trust Music Festival tickets, and a reminder to vote in the mini-show, Colleen introduced the meeting’s guest speaker – Greg Moore (assisted by CJ Dearlove) from Lockyer’s Country Gardens. Greg’s topic was ‘New Perennials and Annuals’.

Greg provided an action-packed 60 minutes with many, many example plants to explain his points and plenty of audience interaction. 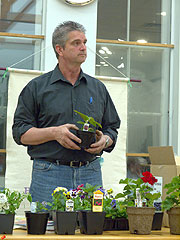 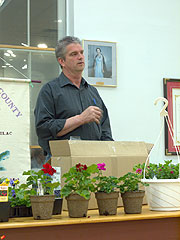 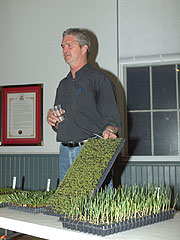 Greg began with some ‘inside information’ on how a commercial garden centre works. He explained the supply chain that brought plants to Lockyers and which included breeders in places as diverse as Brazil and the Netherlands; stock cultivated at the breeders – and a brief lesson in understanding the wealth of information on the the label; rooting stations that produce rooted plants from stock; and the brokers who assemble the orders placed by garden centres.

Greg introduced the members to a range of annuals new for 2013, including a really black petunia, and Sunpatiens (similar to the New Guinea impatiens) which will tolerate sun and heat. Also he showed us Lobelias Lucia and Laguna which are both heat tolerant, and a Begonia Solenia which likes full sun. Included was a geranium Calliope, a cross between a zonal and ivy geranium, which comes in a very dark red.

Greg concluded by giving an overview of trends he sees: gardening in general is on an incline with particular interest in adding features such as patios and water features. In response to customer requests, Lockyers are introducing citrus plants, flowering ‘tropicals’, succulents to suit a hotter and dryer growing season, and home vegetable growing.

Charles and Arline De Bourbon, celebrating their 60th wedding anniversary this year, were the winners of the members prize donated by Lockyers – a spectacular hydrangea. President Colleen Green thanked Greg and CJ for their presentation. 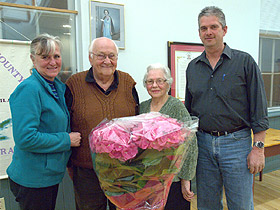 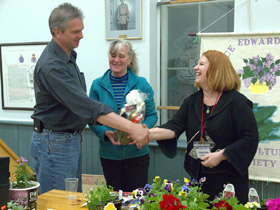 The mini-show topic was ‘Your favourite perennial or annual flowers or a treasured house plant’ which provided plenty of scope for the entrant’s creativity. Six quite different entries were offered. 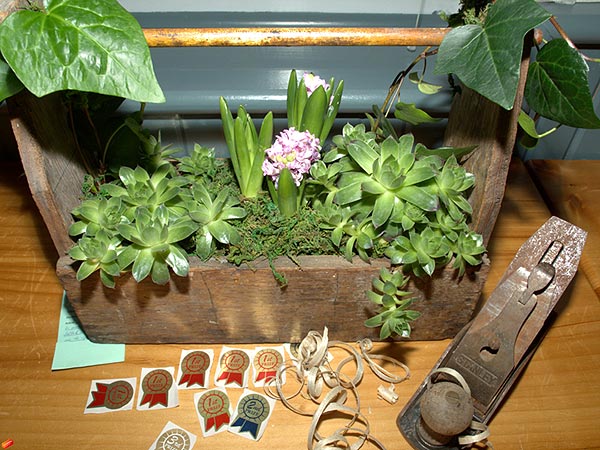 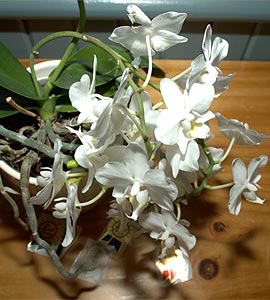 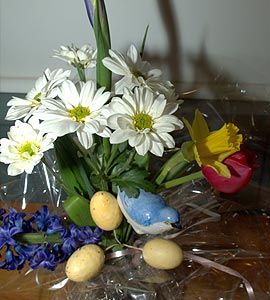 Mini-show entries were judged by the members at large. 1st place went to Kim Katanik-Kuris’ [uppermost in group above], 2nd place to Mary Jenkins [lower-left], and 3rd place to Gwen Reilly [lower-right]. Click the images to see larger versions.